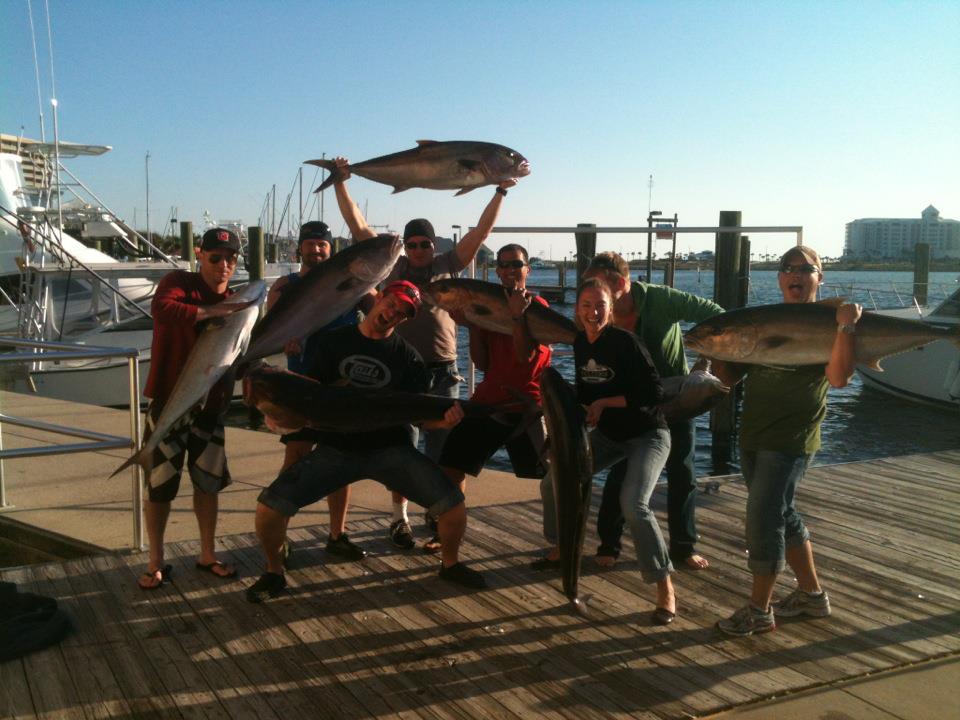 Pensacola Fishing Charters – Inshore
Spanish mackerel continue to be just about a sure bet for anyone looking for action in Pensacola Bay or outside of Pensacola Pass. A number of different techniques will work, but trolling with straw rigs or small dusters works very well.
You’ve got to get out there early in the morning or after the sunset, but there is plenty of speckled trout on the flats and dock lights to be caught.
Mangrove snapper is another option for anglers right now, they can be found around structure like docks, bridges, and rock piles.

Pensacola Fishing Walk On – Offshore
If you’ve been waiting for the offshore trolling bite to pick up now is the time to go. There have been numerous reports of steady wahoo and dolphin action along with quite a few billfish caught down around the Spur.
For those who are willing to travel a little further the tuna and billfish bite is about as good as it’s going to get at the deep-water rigs.
The king mackerel fishing has been great lately around many of the public wrecks. Just slow troll with live bait or speed up and use a duster and dead cigar minnow combination.

Pensacola Fishing – Piers & Beaches
It may sound crazy, but the few anglers who have been surf fishing lately have been finding a fair amount of pompano in addition to some redfish and bluefish.
King and Spanish mackerel continue to be the main target for anglers on the Pensacola Beach Gulf Fishing Pier and Navarre Beach Fishing Pier. Now’s also a good time to hit one of the local piers if you want to take a shot at a tarpon.

Charter Fishing Pensacola – Freshwater
Anglers on the local rivers still are dealing with high water levels and a lot of dirty water from all of the recent rain fall. Although Jim’s Fish Camp, located near the Escambia River, reported that anglers have been doing well with the bream and bluegill lately.