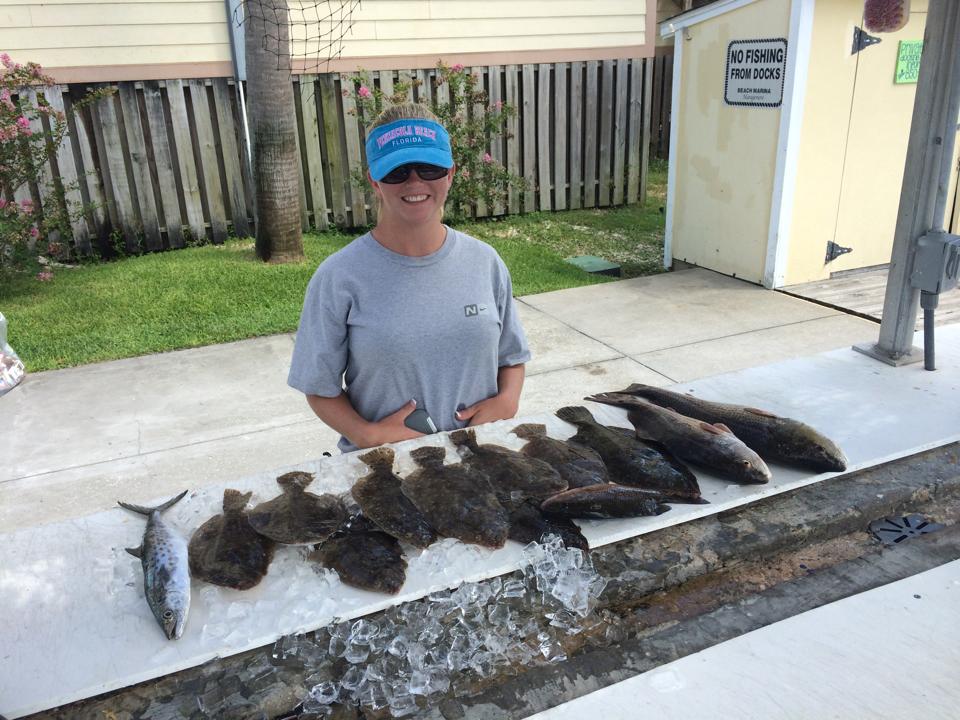 Pensacola Fishing Charters – Inshore
Anglers have had no trouble finding schools of bull redfish in Pensacola Bay this week. They have been popping up in a few different areas, but a quick ride around the bay and you should be able to find some action. It’s also always a good idea to keep an eye out for other boats grouped up.
Speckled trout fishing is tough right now, but within the next couple of weeks they should start stacking up in the canals, rivers, and bayous.
Flounder can be caught on hook and line around structure in the lower parts of Pensacola Bay or gigged after dark along Fort Pickens and Johnson’s Beach.

Pensacola Deep Sea Fishing Charters – Offshore
It looks like the seas are going to be calmed down by the time Saturday morning rolls around so you might take advantage of a weather window on a weekend and head offshore.
As you know red snapper are closed along with some other federal closures, but if you’re going bottom fishing you can still harvest amberjack and triggerfish in state waters along with vermillion snapper, gag grouper, and scamp in federal waters.
There’s still quite a few king mackerel around on the shallow wrecks and reefs and there should be some wahoo, dolphin, and blackfin tuna to catch out around the Nipple.

Pensacola Fishing – Piers & Beaches
The water temperature is cooling down, so you should be able to pick up a few pompano either off the beach or on one of the gulf piers. If you’re on the beach try sandfleas and shrimp, while on the pier you’re better off with a pompano jig

Inshore Fishing Pensacola – Freshwater
According to a few reports the water level and conditions are right for some good largemouth bass fishing on the rivers. Although it sounds like we’ll need a couple more cold fronts to get the striped bass going.