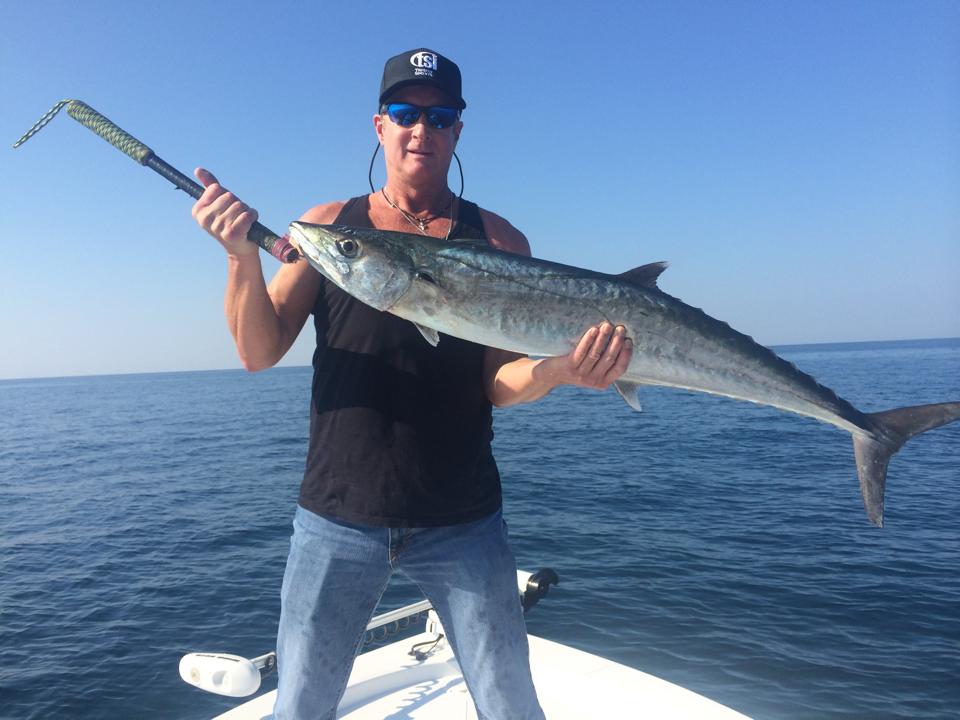 Pensacola Fishing Charters – Inshore
Catching fish hasn’t been easy in Pensacola Bay and other nearby bodies of water with the August heat, but it should slowly start cooling down anytime now.
A few people have reported doing pretty well with the speckled trout on the grass flats super early in the morning, but it shuts down as soon as the sun gets up.
A few king mackerel are already being caught around the Pensacola Bay Bridge and Port of Pensacola. As usual just catch some live menhaden in one of the local bayous and put them out on balloons.

Deep Sea Fishing Pensacola – Offshore
Getting out of Pensacola Pass earlier this week was a tough task with the strong outgoing current and south wind, but the upcoming forecast looks great.
Bottom fishing in the Gulf has actually been really good lately. Lots of vermillion snapper are being caught along with a good amount of amberjack in state waters. Remember that triggerfish and amberjack are both now closed in federal waters.
There’s still plenty of king mackerel around the wrecks out in the Gulf. A number of different techniques will work, but be sure to throw out a fly line if you’re bottom fishing.

Fishing Charters Pensacola – Piers & Beaches
This is a great time to fish Bob Sikes Bridge and Fort Pickens Pier for big Spanish mackerel. Live shrimp or alewives are your best bet, but they can be caught using Gotcha Lures as well.
If you are looking for action off the beach I would suggest walking along and looking for schooling fish like Spanish mackerel, ladyfish, and bluefish.

Pensacola Inshore Charters – Freshwater
There hasn’t been a whole lot of anglers hitting the local rivers, but it sounds like the bite has been decent considering the hot water temperature. Bass, bream, and catfish can all be found this time of year on Escambia, Blackwater, and other nearby rivers.