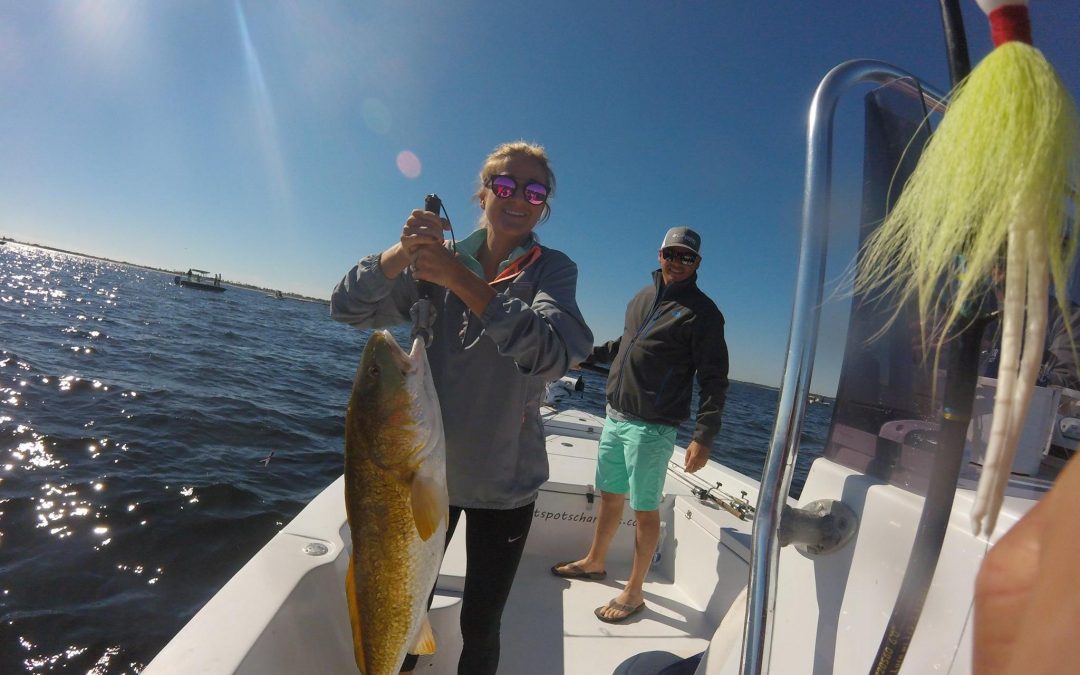 Inshore – Pensacola Fishing Charters
The bull redfish bite in Pensacola Bay has been unreal over the past two weeks and they shouldn’t be going anywhere anytime soon. All you have to do is find one of the big schools and you can literally catch them until your arms are ready to fall off.
Flounder gigging doesn’t sound like it’s been all that great lately, all we can hope for is that they go out on the next couple of cold fronts. Although there have been a couple reports of anglers catching quite a few on rod and reel.
Speckled trout have started making their way into the canals, bayous, and rivers, but the bite will definitely get better once the cold weather sets in. Both live and artificial baits will work, so just use whichever one you have more confidence in.
Offshore – Deep Sea Fishing Charters Pensacola
Triggerfish, amberjack, and red snapper are now closed in state and federal waters, so if you’re going bottom fishing and want to catch stuff you can keep you’ll have to target vermillion snapper, mangrove snapper, scamp, and gag grouper.
The tuna bite out around the deep-water rigs has been steady with a lot of nice sized yellowfins being caught. They can be caught using a variety of different tactics, but when possible it’s always a good idea to have some live bait in addition to frozen bait to get started chunking.
Piers & Beaches – Pensacola Fishing
Pompano have been few and far between so far, this fall, but fishing for whiting has been great on both Pensacola Beach and Perdido Key. Since the pompano have been so scarce it’s probably best to just fish with fresh shrimp right now, instead of a combination of shrimp and sand fleas.
This is a good time of year to fish at both the Pensacola Bay Fishing Bridge and Bob Sikes Bridge, but you’ll find that every day is a little different. Your best bet is to use live shrimp with redfish, bluefish, white trout, speckled trout, and mangrove snapper all being possible catches.
Freshwater – Inshore Guides
It doesn’t sound like there’s been much consistency on the local rivers according to several different reports. Bream, crappie, largemouth bass, hybrid bass, and catfish are all possibilities this time of year, you just have to decide what you want to target.